Before 1880 over half the population of the United States lived on the farm, and, yes, life was difficult. People woke up at the crack of dawn and after sunset read by candlelight. It’s hard to believe, but there was no electricity, no refrigeration or air conditioning, no radio or television, no computers or cell phones.

For entertainment, well, there wasn’t much in the way of entertainment. There wasn’t much shopping, either, except at the general store. Even there merchandise was limited and practical, and the head of the family did most of the shopping, bartering butter, cheese, eggs, vegetables and other staples that the merchant would resell. Thank goodness, Sears and Roebuck came along when they did. 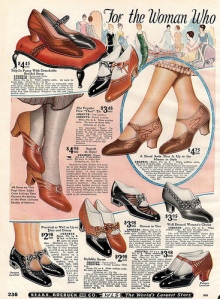 Richard Sears produced his first catalog in 1893. The following year he expanded his self-declared “Book of Bargains” from jewelry and watches to include sewing machines, sporting goods, musical instruments, saddles, firearms, buggies, bicycles, baby carriages, furniture, china, glassware, and clothing for the whole family. The 1895 edition consisted of 532 pages. In 1896 he published in the spring and fall and added specialty catalogs, which two years later included photographic goods and talking machines.

Early on Sears added color. Buggies were presented in red, green, brown, and black with gold or silver trim on buggies. In 1897, shoes were advertised in black, red and brown. In 1899 carpets, furniture, and china were shown in various shades.

Although Mr. Sears retired in 1908, the company he started has always kept up with the times. In 1909 Sears carried a motor buggy. This item was replaced in 1913 with a specialty catalog for automobiles. In subsequent decades it carried television sets, dishwashers, electronic garage door openers, and microwave ovens.

The Christmas catalog first appeared in 1933. Its 87 pages were filled with presents for the entire family. There were dolls and toy trains, fruitcakes and chocolates, and live singing canaries, the latter being an accompaniment for budding American Idol competitors, perhaps. The cover of the 1937 catalog showed a photo of a brother and sister with the quote, “See the things that Santa brought, More’n what we thought he ought. Things for Mom and Daddy, too, N we hope there’s some for you.” In 1968 it was renamed the “Wish Book.”

If you long for the good old days, let your fingers do the walking through the Wish Book. It’s been online since 1998. In 2010 Sears went mobile, so customers can access the catalog with their smartphones. Earlier this year the company added another convenience: if you buy online and choose to pick up your purchase, a store associate will bring your shopping cart out to you. You won’t even have to leave your car.